January 31, 2022 was the go-live date for electronic clinical documentation (ClinDoc) at Bridgeview (BVU) and Skyview (SVU) Units at Gorge Road Hospital. Despite staffing shortages due to the Omicron wave of coronavirus, and a large contingent of casual staff working in the units, clinical, medical, and allied Health staff and leaders alike feel that the transition has been remarkably smooth.

“It has been one change after another for our Skvyiew and Bridgeview teams and they approached yet another change like complete rock stars,” says manager Kirsten Hagen. “There were times of worry and feeling ‘this is all too much’ but we came back to the basics and took an approach of improvement step by step. This change was bigger than ‘going electronic’, it was about improving processes and practices and enhancing collaboration between clinical areas, allied health, pharmacy and physicians.”

Lindsay Gilbertson, the clinical nurse educator (CNE) at the Bridgeview Transitional Unit (BVU) for the past year, reflects on the mood among staff as go-live drew nearer. “There were several times when we were thinking, ‘How on earth are we going to do this?’ But it’s almost felt like a non-event this week. I attribute that, partially, to the IHealth team being so present for the last month or so. There was lots of preparation before go-live, like practicing, and talking about it. Staff have jumped on board. We have [many] casual HCAs, and they’re excited. All in all it’s been surprisingly good. I feel proud we’ve accomplished this change.”

Looking ahead to how it will affect clinical practice and patient care, Gilbertson says, “I’m already starting to see the benefits for the patients here, of having all that documentation in PowerChart that we couldn’t [previously] see in a way that was useful for the team. It’s going to affect our patient outcomes.”

RN Olivia Sabnal’s first day at BVU was on January 31.

“I came from Westshore Urgent Care, and Emergency at Vic General,” says Sabnal. On her first day at the unit, she asked for time at the computer, relearning the EHR from an acute care perspective.
“Coming here and doing this EHR, for me, seeing the CareCompass just like LaunchPoint – everything that I’ve learned, it all came together. I thought to myself ‘Wow! I did this already, it’s just an alternate way of getting information.’”

Both Gilbertson and Sabnal are enthusiastic about how the EHR enhances the hand-off process between shifts.

“To make sure things get passed on properly, we are able to put things in a place where everyone will see it, and it’s patient-specific. I find myself already looking forward to when care plans are on here. I can’t wait until it’s all electronic,” says Gilbertson.

BVU LPN Kerry Loukes agrees: “It’s nice to have it all in one place, and have everybody put their input in.”

Asked about finding time to do the training, Loukes says she completed it “in bits and pieces. There was always lots of help, and coworkers had a good understanding of it, so they were able to share their knowledge.”

One of the HCAs on BVU, Fikerte Mengistie, is positive about the changes to documentation. “Time-wise, it’s really good. This is much better than paperwork.”

Mengistie has a reputation on the floor as an EHR “super-user”. Asked about this, she says, “If you show me something, I (snaps finger) immediately catch everything.”

New location as well as new practices at Skyview

On the Skyview Recovery Unit, CNE Pavla Beattyova describes a transition period that was longer than initially planned.

“We originally started to prepare for this change last year in March, anticipating going live in May. That did not happen, and with our move from VGH to GRH being pushed from June to October, so did the Go-Live for IHealth,” says Beattyova.

“Having said that, I am so very impressed with all the Skyview staff, who have faced the change with such positive attitude. I think that is what made our go-live go so very smoothly.” 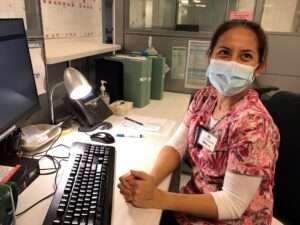 “It was a slow transition because we were expecting it for quite a while,” says Vergara. “It helps because we were doing the annotations beforehand, but when it totally went to electronics, it was still a bit confusing on where to put the documentation. The support team has been going around and helping us, and they showed us new stuff, which is cool. It’s more clear to me now.”
Congratulations and thanks to all staff involved for their hard work, dedication and professionalism in making this change towards improved quality and consistency of care. 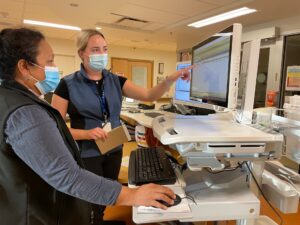 The launch of the Cerner CareAware Capacity Management (CCM) system is on track at Royal Jubilee Hospital (RJH) and Victoria General Hospital (VGH), thanks to 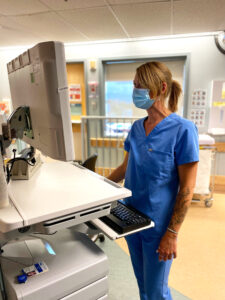 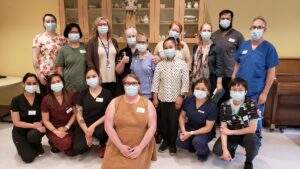